The reason, why I am collecting handcuffs today... The Presto Lyon Brevette is an old France handcuff from the 1920s. The special form you see is great to hold the cuff in the hand. It's a two finger grip. Special is the lock. It has two lock striker plates which are used by the flat key. This key you see on my picture isn't the original one. It's self-made and doesn't fit 100%, but well enough to open the cuff, if you are careful. Also, they can't follow-through and need to be open by the key. That the officers can cuff a person without using the key, the cuffs have a small lever on the connection from the bow and the cuff. With this lever, you can hold the opened bow in the position and they don't fall in the lock. 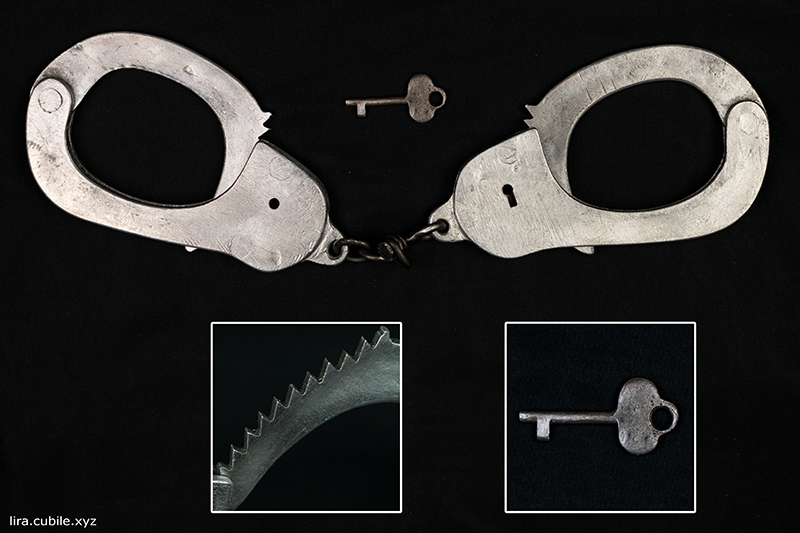 Nobody really knows what kind of handcuff this is... Because of the form, we can say it's a french type. It looks handmade, because every theeth is different and the chain is made of a kind of twisted nails. Maybe it's the first form before "La Pegy", because this cuff looks a bit like the ones La Pegy produces. Or somebody crafted this handcuff in the style of the La Pegy ones. 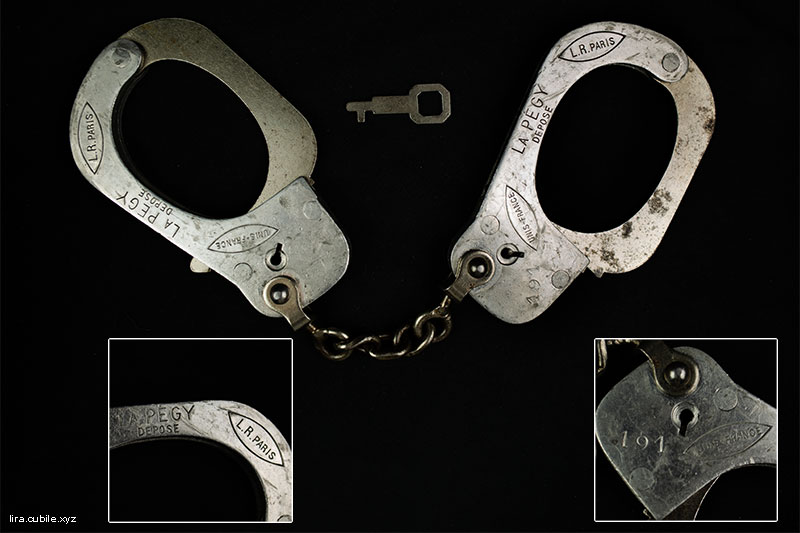 The la pegy handcuff is a French aluminum handcuff from the 1950s with steel bows. They are built very simple and don't have a doublelock. 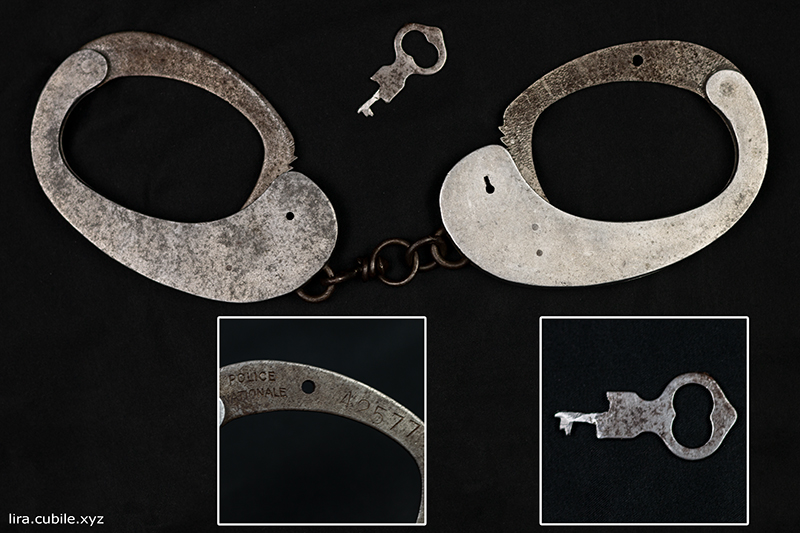 An old French handcuff. This key is not the original one. Sometimes this one is called "La maroccaine", but this name is also used for the "Sureté Nationale". It has no doublelock. 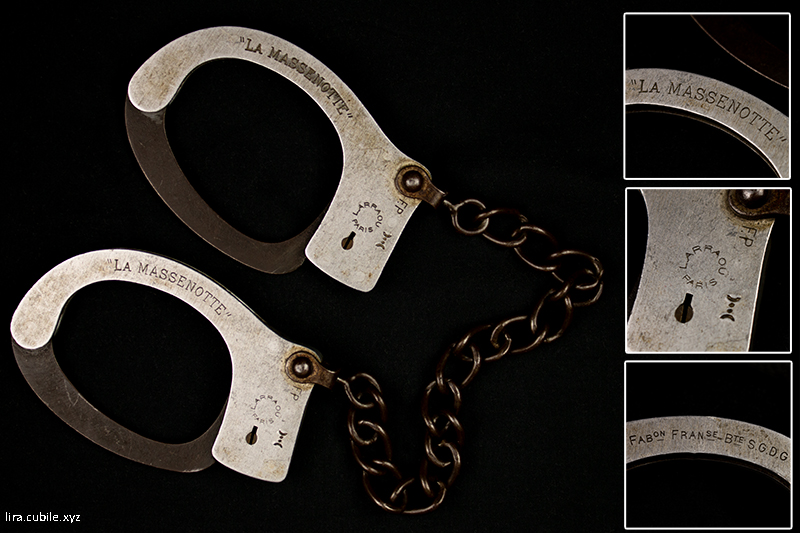 This handcuffs would probably produced around the 1950s. The first catalog findings with the model shown are from 1920. It also exists a version with a short chain. Sadly I don't have a key for it, but will make one in the future. On one side, you can read "FABon FRANse Bte S.G.D.G.". "FABon FRANse" says it is fabricated in France, "Bte" stands for "breveté" which means "patented", and "S.G.D.G." stands for "Sans Garantie Du Gouvernement" which means "without guarantee of the government". 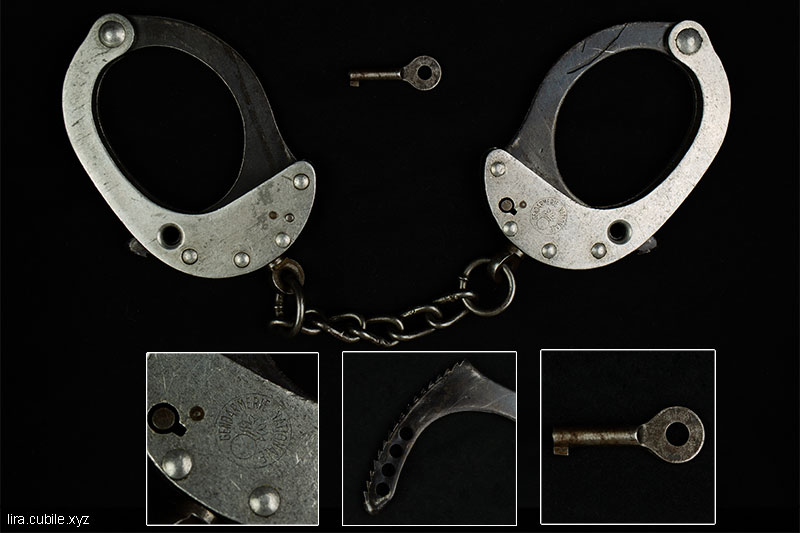 Rivolier handcuffs from around the 1940s. They look similar to the 1970s produced German "Baden-Württemberg" police handcuffs, but with a longer chain in this case. It also exists with a small two ring chain like the German ones. In my case there are missing the locks, which secure and "doublelock" the cuffs. You see the holes for them in the cuff itself and in the bows of them. 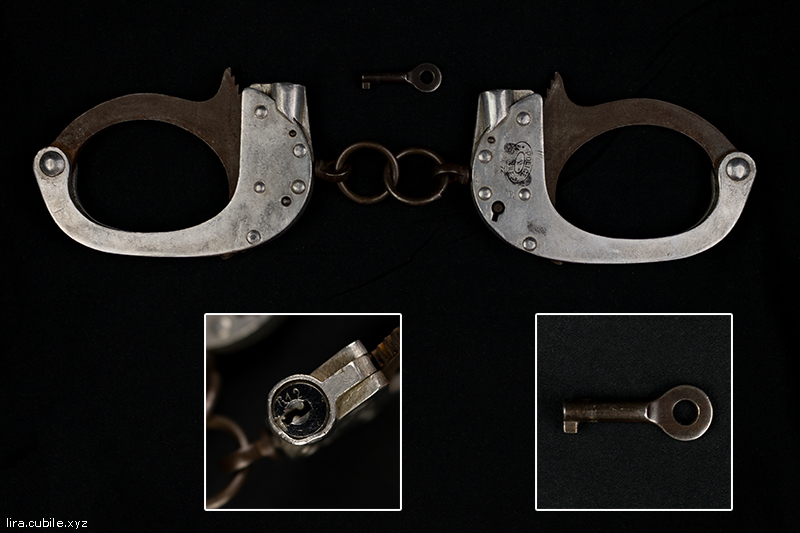 A French handcuff, produced in the 1950s. I only have the key for the main lock. The doublelock is activated with a key you use on the top of the cuff. The lock on my cuff has the number G12 on it. If somebody owns this key, please send me a photo! It would be awesome!